Ever pass by a beautiful mural and think, “I wonder who painted that?” Well, we’re about to tell you about an amazing artist who’s responsible for creating breathtaking murals right here in Chilliwack.

Meet Carrielynn-Victor: Maker of Murals, an all around beautiful human being. 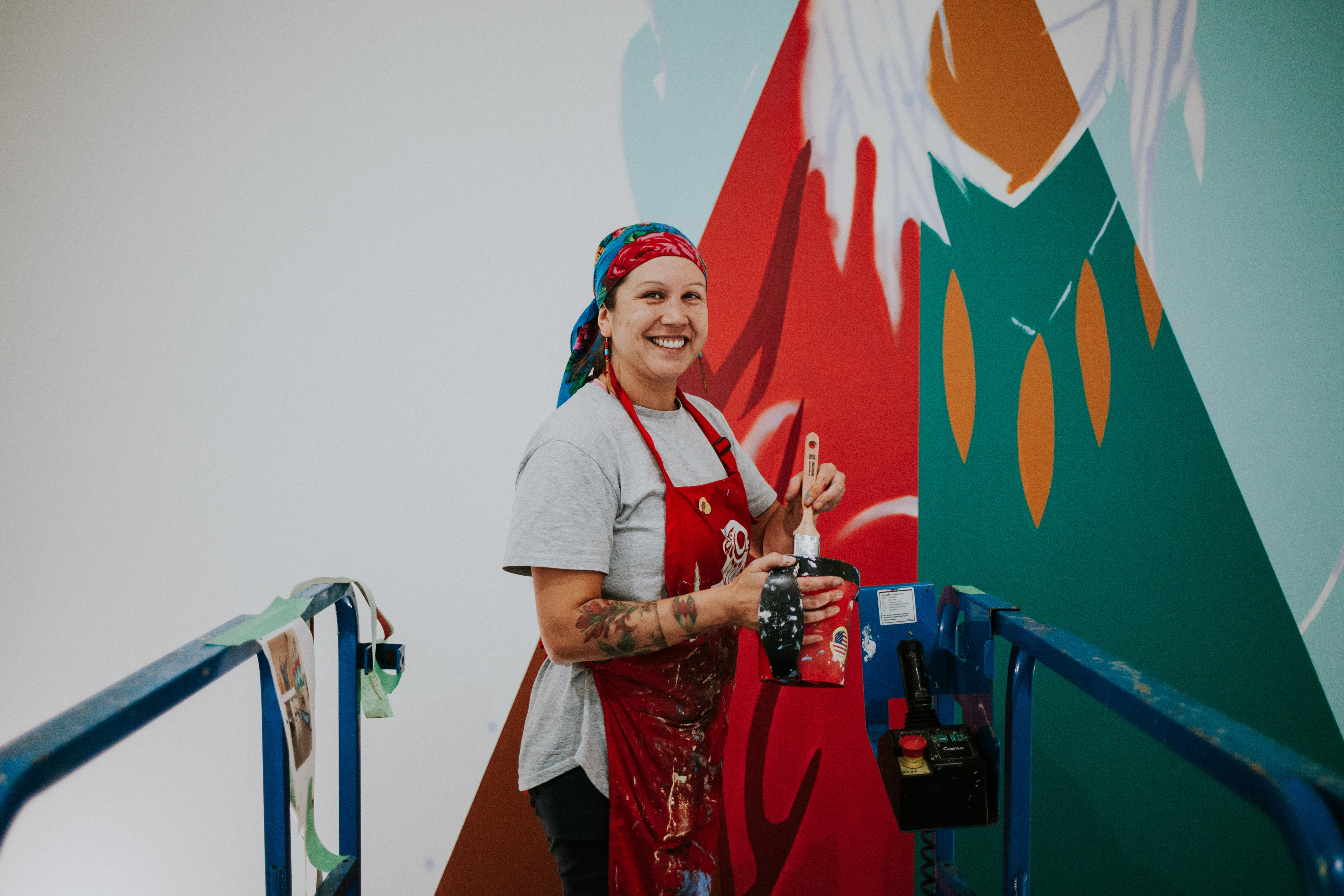 Carrielynn spent the early years of her life living in the Cheam Indigenous community. After some time, her parents separated and so she began to split her time between their homes in Chilliwack and Vancouver. She grew up going to a lot of different schools and living in numerous neighborhoods along the way. Throughout all of this movement, Carrielynn held onto creativity as a way of sorting through and expressing her thoughts and emotions.

Carrielynn was quite a shy adolescent – and, when she was old enough to move out, she decided she wanted to change this part of herself. So, she took a job that would push her out of her shell to help her branch out into the world with a little more vigor. She soon found herself dealing cards and dice in a casino. Loud, fast paced and face to face with customers all day definitely did the trick – and, after a long day of work, she’d come home and settle into something creative like painting, journaling or dancing. 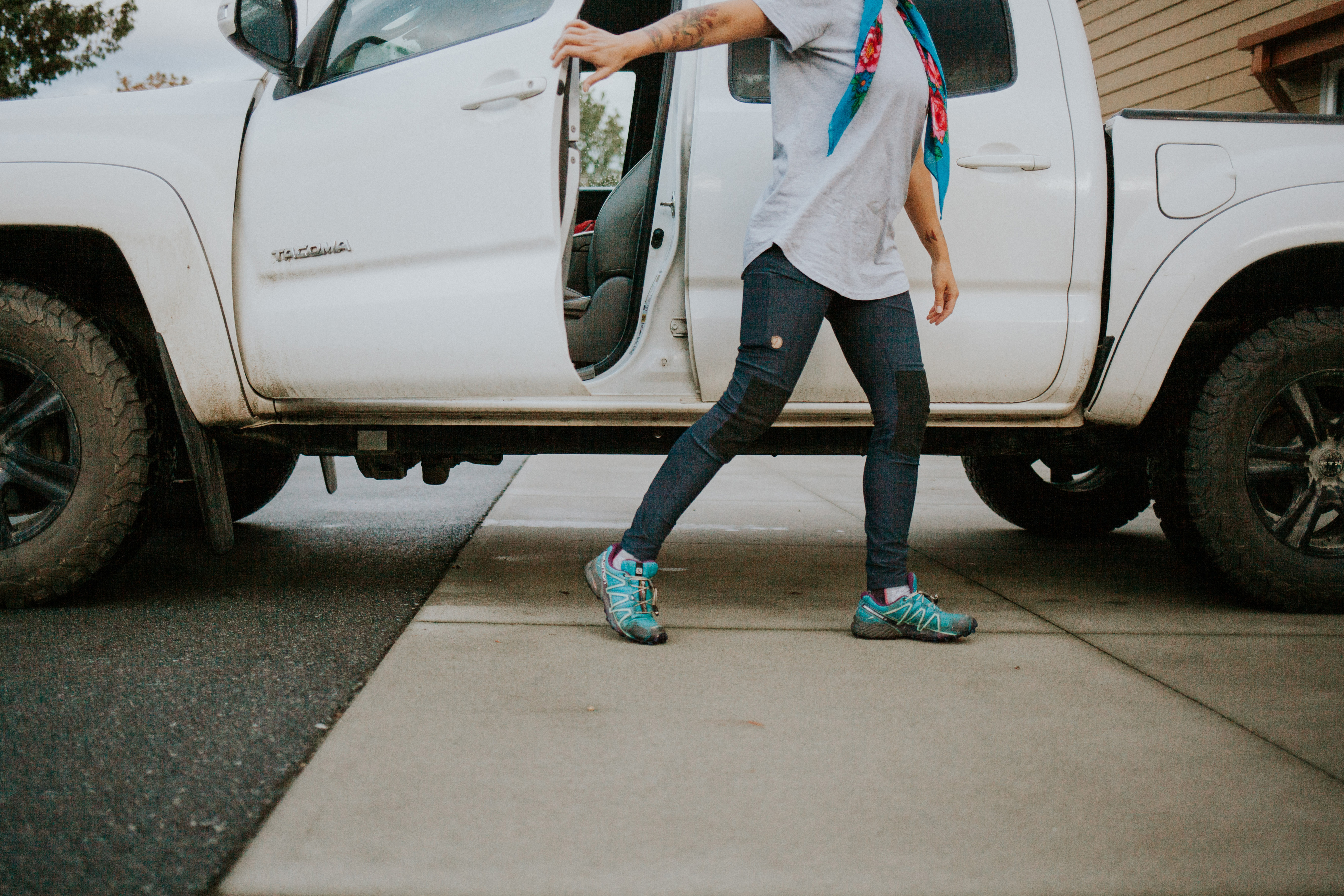 Dealing cards and dice, eventually built Carrielynn’s confidence up enough and gave her the push to pursue something she loved: hip-hop. Carrielynn spent seven years travelling across Canada writing and performing hip-hop – her face lit up when telling us about this time in her life.

Through her hip-hop career, Carrielynn found an artist’s collective in Vancouver. She told us she learned a lot through the collective. She said at one point, she met a mentor that said something she’ll never forget and completely changed the course of the art she was pursuing. She said, “your art is good, but it doesn’t feel like you know who you are”. Those words shook her to her core as, Carrielynn completely agreed with her. She knew she needed to seek art that gave her the ability to express not only herself, but her Indigenous roots. And so, Carrielynn found her way back to Chilliwack and started pursuing art that connected her with herself, and community.

When did murals start to come into play?

Murals started early on in Carrielynn’s journey – however, they completely changed over the years in both her style and approach.

In high school, Carrielynn started dabbling in murals. She had a really supportive art teacher who allowed students to have a part in major creative projects around the school. One day while feeling especially inspired, Carrielynn approached her art teacher and proposed that she let her do a mural in the main hallway at their school – and well, she let her do it (#bestteacherever). Carrielynn was always drawn to working on murals after that. Something about the size and scale always interested her.

Years passed, and Carrielynn was once again given a mural project – but this time, it was on a ceiling (we repeat on a *ceiling*). This job was her first big lesson in pre-planning. Going into a ceiling mural without a plan is a recipe for bruises, back pain, and a permanent kink in your neck (we’re sore even thinking about it). So, after a gruelling 44 hours of facing every which way (upside down, sideways – you name it) Carrielynn left knowing she had to do her next mural differently. 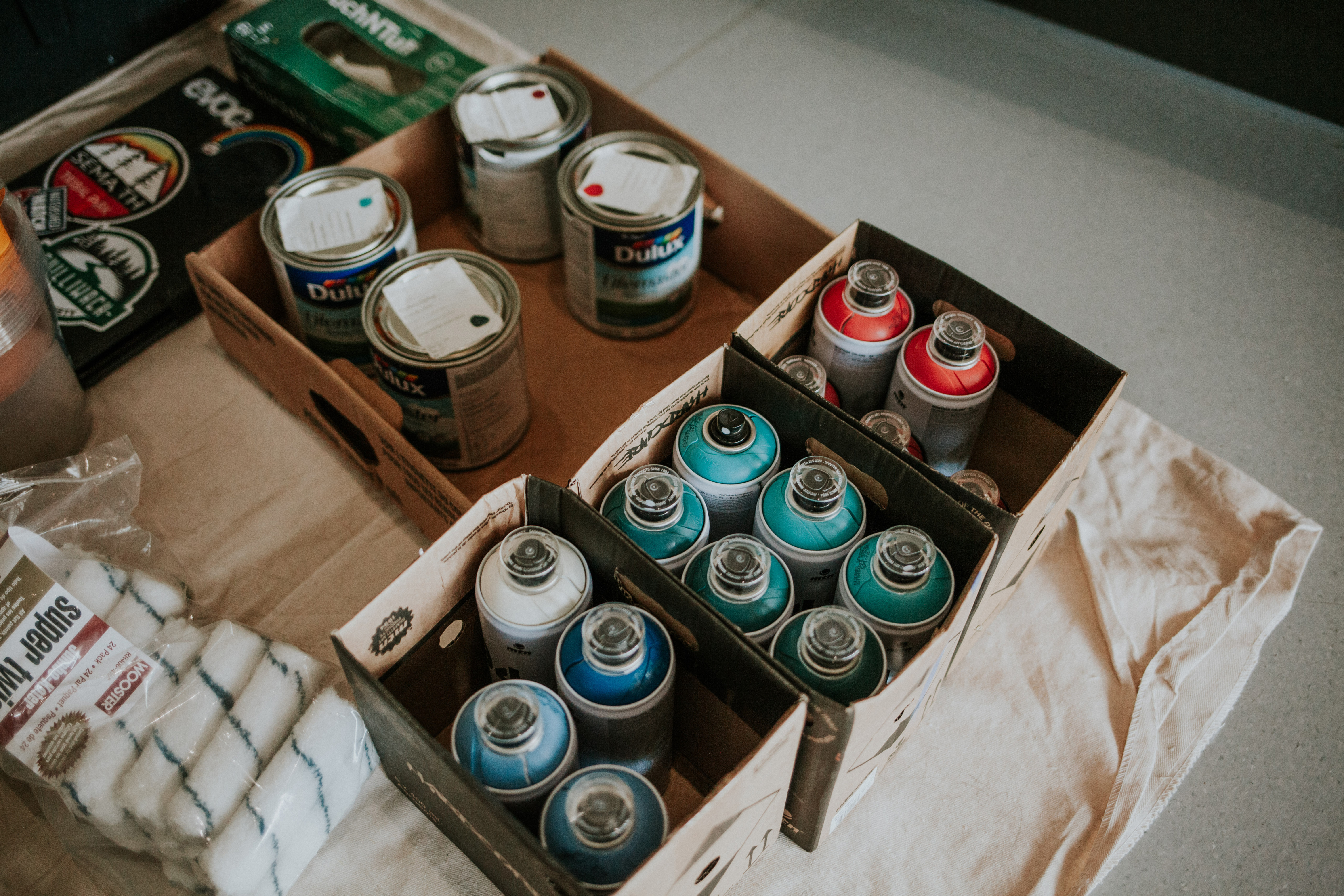 Ahh yes – Vancouver Mural Fest. One of the most iconic events for mural artists across British Columbia. You have to be hand selected to participate and well, Carrielynn was (she’s that good!). While she was honored to be selected, Mural Fest definitely made Carrielynn a little (ok a lot) nervous. However, Carrielynn tells us that for newbies, you’re paired up with a mural artist that has been around for a while and can help you out – so that really eased her mind and allowed her to relax going into the process.

Carrielynn learned a huge lesson in pre-planning through Vancouver Mural Fest that completely changed the way she approached murals: projection. That’s right! All of those murals you see downtown Vancouver? They’re typically drawn digitally by the artist before, blown up by a printer and projected onto the applicable space so the artist can plan out their approach rather than going completely free hand.

Carrielynn’s planning process was forever changed after the artist’s support she received from Vancouver Mural Fest. 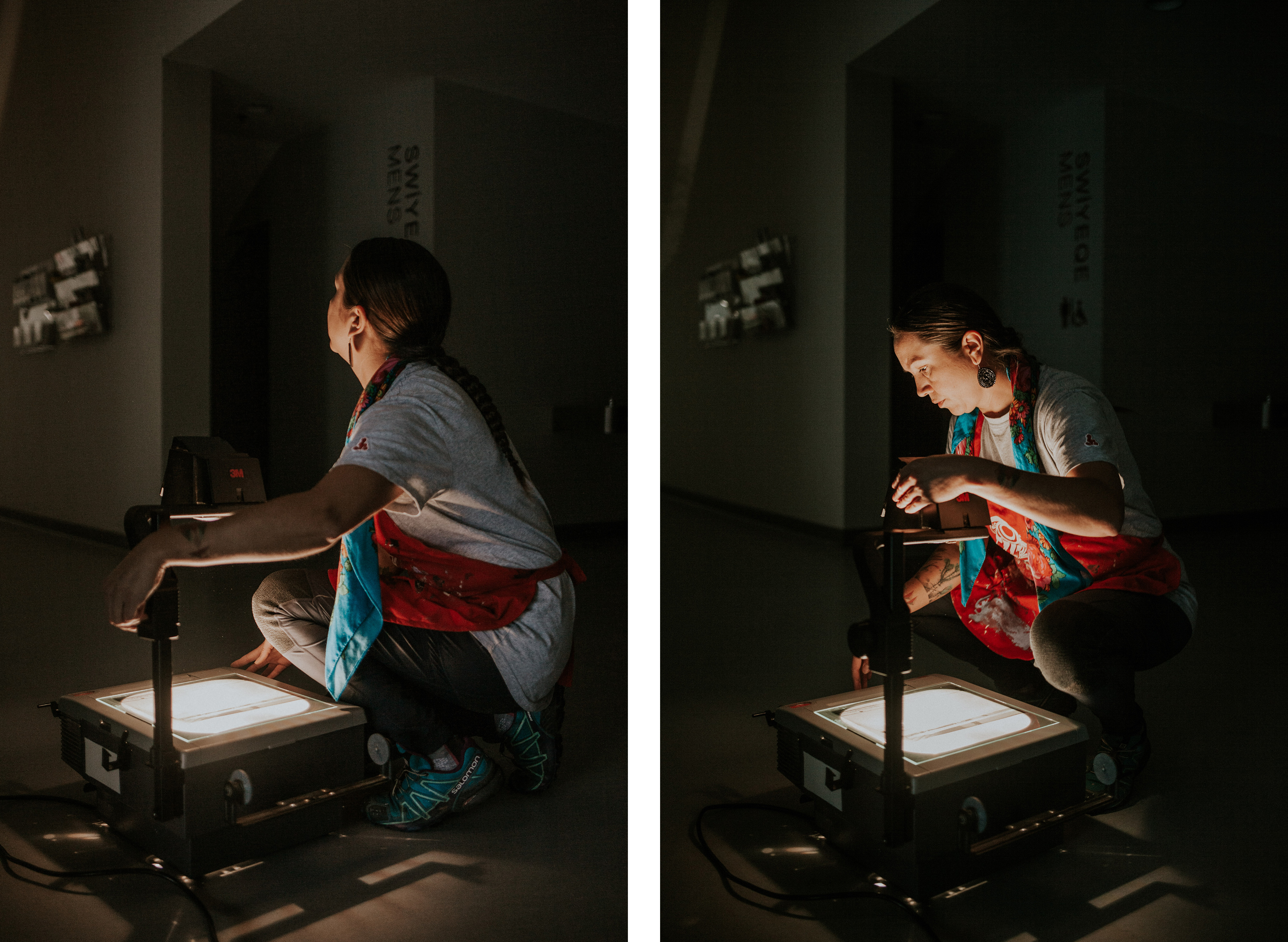 Storytelling through her work

Carrielynn tells us it’s simple – it’s like planting a (metaphorical) seed. She says she plants the seed of a story early on in the process, and makes sure she gives it the right amount of time and attention to help it grow. She also relies on trusted community members to help her through the process. Eventually, the seed blossoms and turns into a beautiful piece of art. 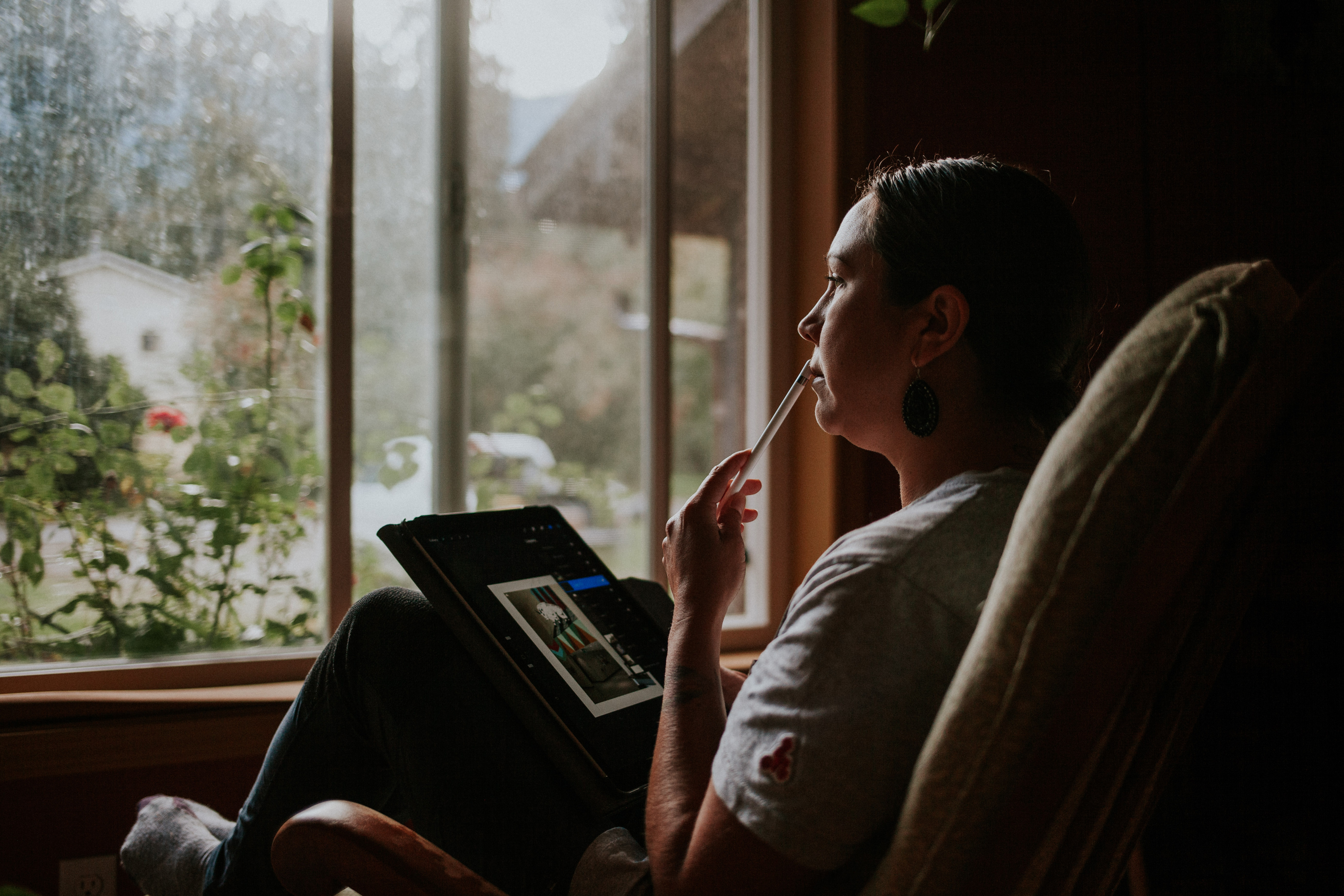 What’s the story behind her piece at the Cheam Multiplex?

Carrielynn was given free reign for the multiplex project in Chilliwack (no pressure!). She first examined what the space was meant to be and what feelings it was meant to draw out of people. She landed on it being a place to gather. A place for people to celebrate weddings, and also a place to celebrate the loss of a life. It’s a place for day to day meetings, and a place for community to come together for sporting events. She told us that she wanted people to see themselves in the mural, and to be able to relate to it in whatever moment of their life’s journey they were in. So, she incorporated different generations of people, shapes and patterns that pay homage to our community’s Indigenous roots, animals that are meant as a metaphor to our community’s lineage, and more. She really poured her heart into this piece, and it’s one that you have to see in person to truly appreciate.

What other forms of art does Carrielynn like to create?

Pen, ink, watercolors and acrylic are her favorite tools to use for abstract pieces for fun, or for gallery shows. Carrielynn also loves to draw digitally – in fact, she’s working on artwork for a children’s book at the moment!

Can you buy Carrielynn’s art?

Yep! You can buy prints of her artwork. Right now, Carrielynn is not selling original pieces – but, she does do gallery shows if you want to check out her work in person. 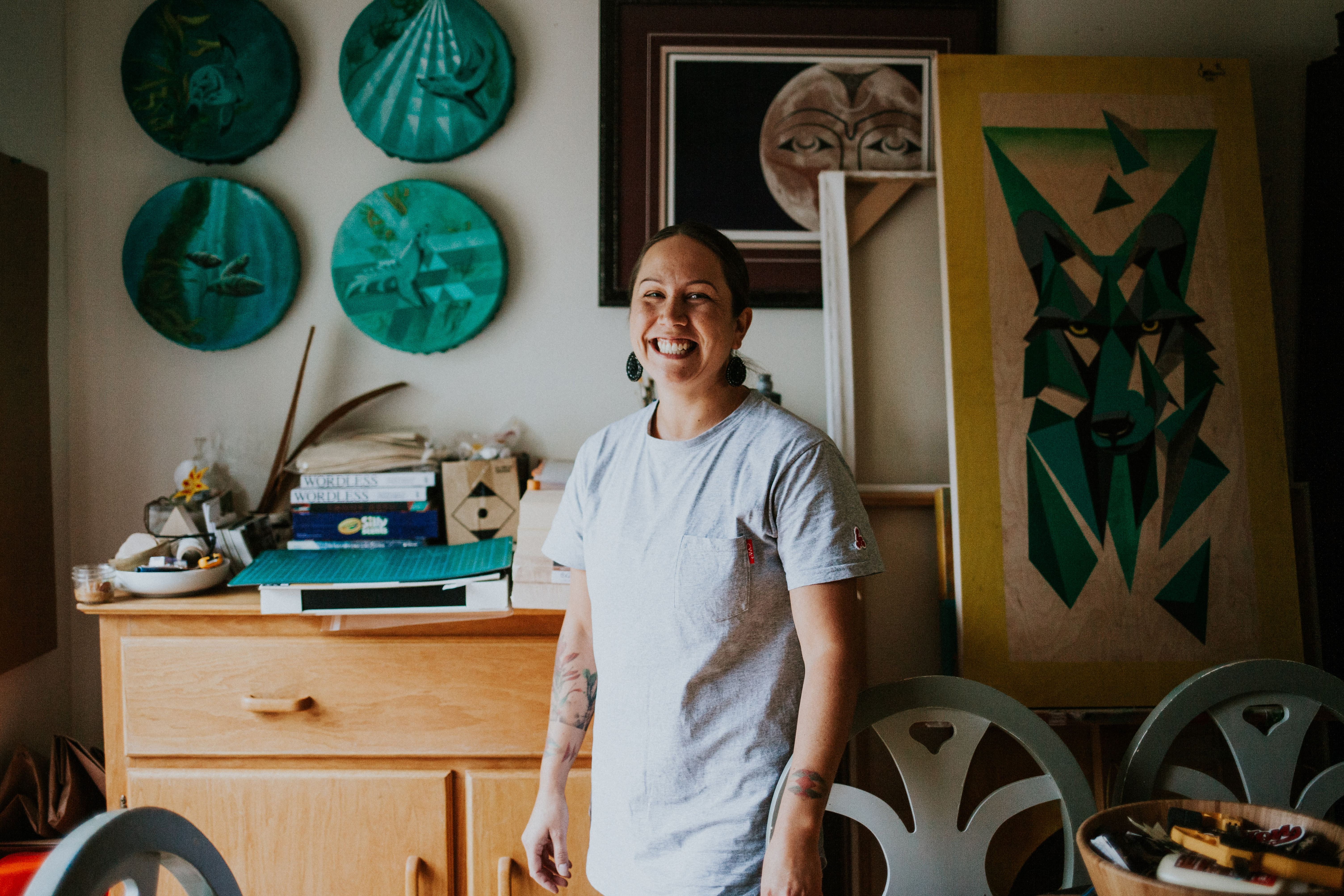 It’s top secret… but we’re going to tell you anyways (because what’s a Meet the Maker blog without a couple secrets spilling out?).

Carrielynn is in talks with the Algra Brothers who are looking to transform parts of the downtown Chilliwack area into interactive public art pieces. They’re currently working on a new type of technology to help bring this interactive art to the heart of downtown, and we can all probably agree that this is something we’re looking forward to. 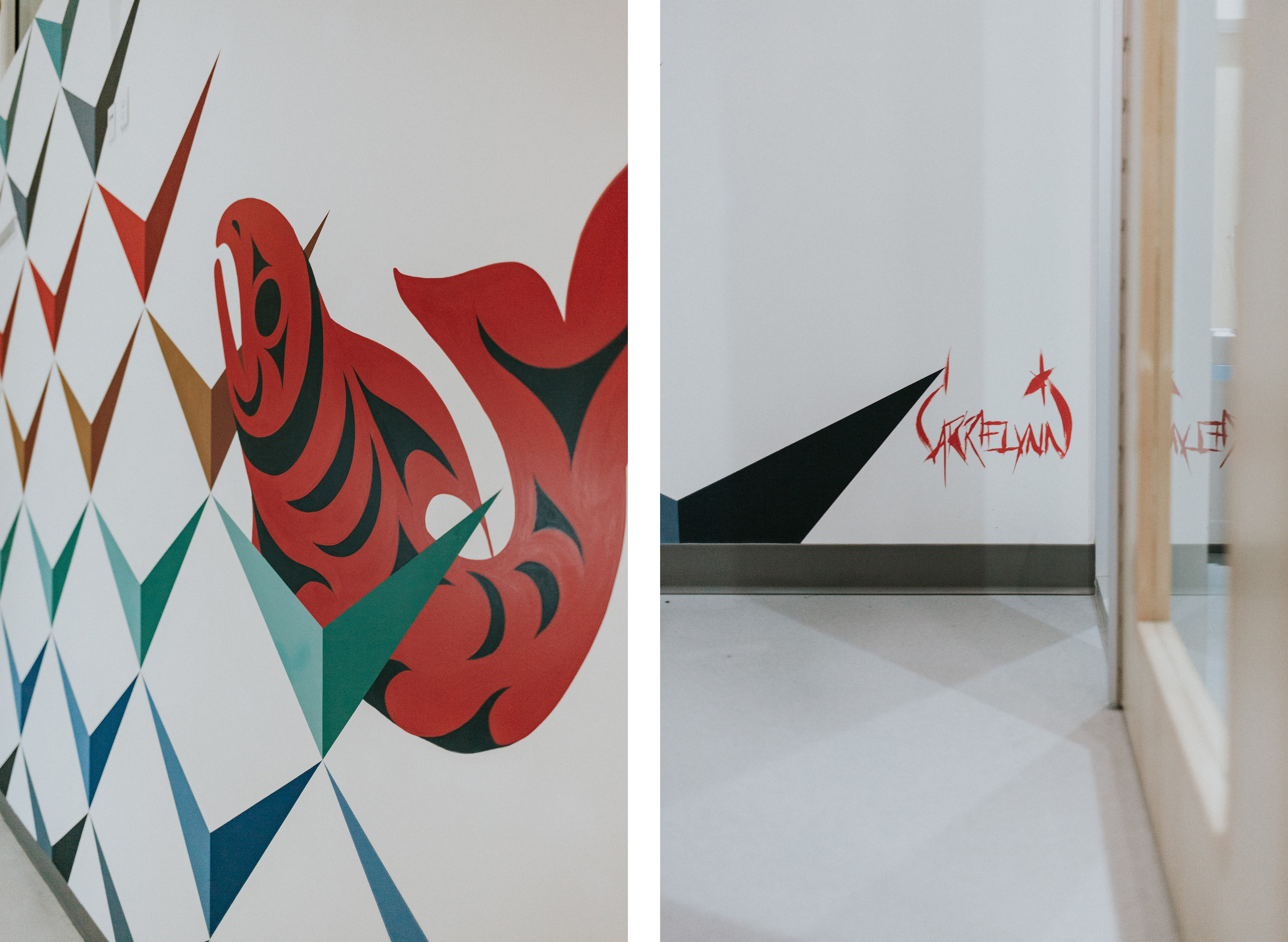 Wanna follow along with what Carrielynn is up to? Find her on Facebook and Instagram. And, why not plan a little scavenger hunt to seek out all of her murals around the Fraser Valley? You can find them at the following locations from East to West, Cheam to Vancouver:

And she has 2 local school murals planned for 2020 on the way!

We’re so excited to be partnering with Carrielynn to give away one of her four of her limited edition art prints! Visit our Instagram page to find out how to enter and, as always, be sure to tag us in your #ShareChilliwack moments.

Read More
Comments Off on Meet The Protectors

Read More
Comments Off on Chilliwack in 2022: A Year in Photos

How to Spend 48 Hours in Chilliwack During the Holidays