Just off Yarrow Central Road sits a real-life fairy tale! You may have noticed the castle-like buildings, the ship emerging from the tower, and maybe even spotted one of the bright garden terraces. So, what exactly goes on behind those enchanted walls? Let’s find out… 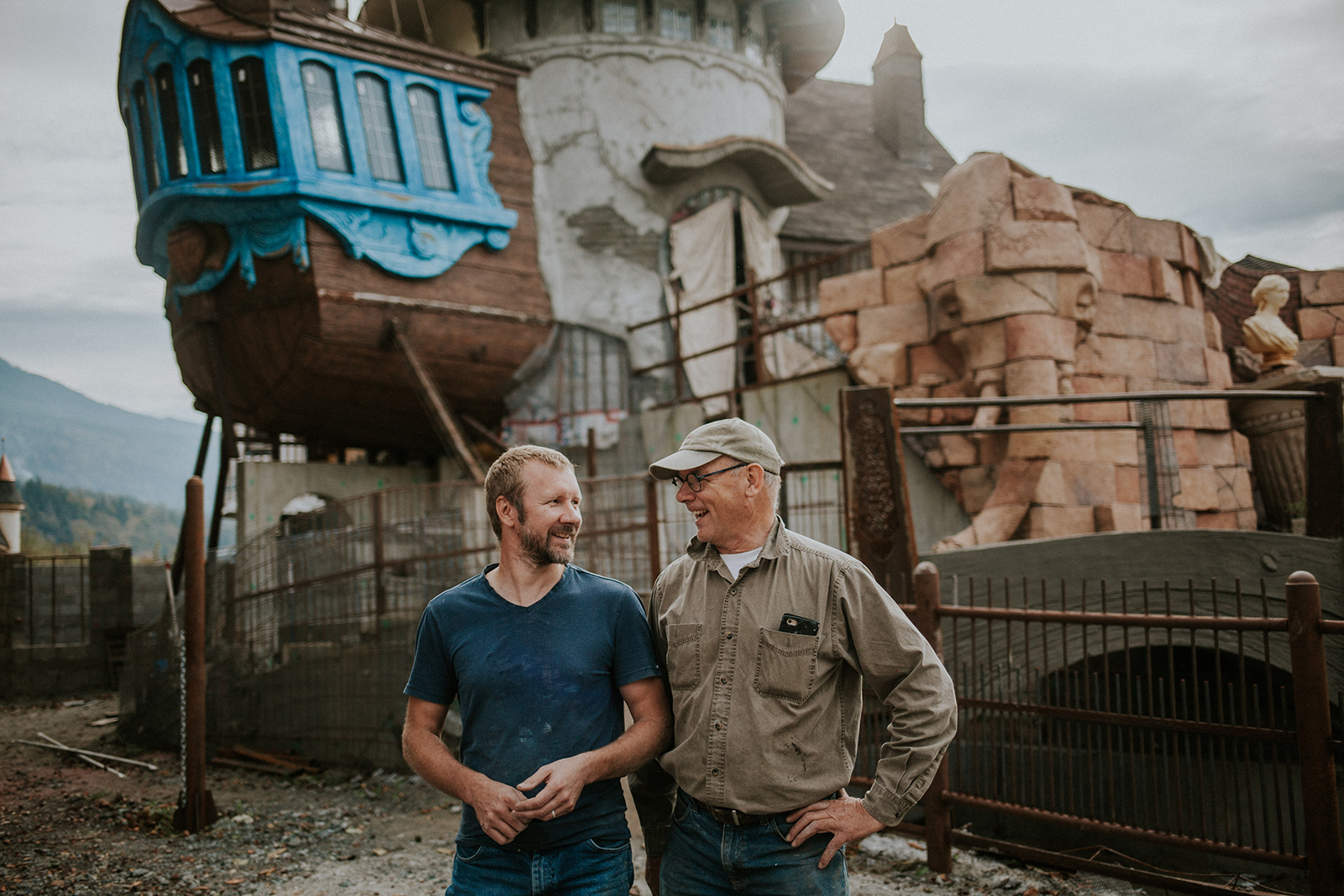 Meet Dan and Peter Sawatzky: Makers of Imagination and the father and son masterminds behind the Imagination Corporation. They are part of a 7-person crew who use everything from state-of-the-art computer assisted robots to old fashioned hand tools to build their wonderful creations. They ship their projects (which range from small signs to massive theme park installations) all over the world. If you need a 40ft Viking longboat in Dubai or a pirate train in Trinidad… they’re the people to call! 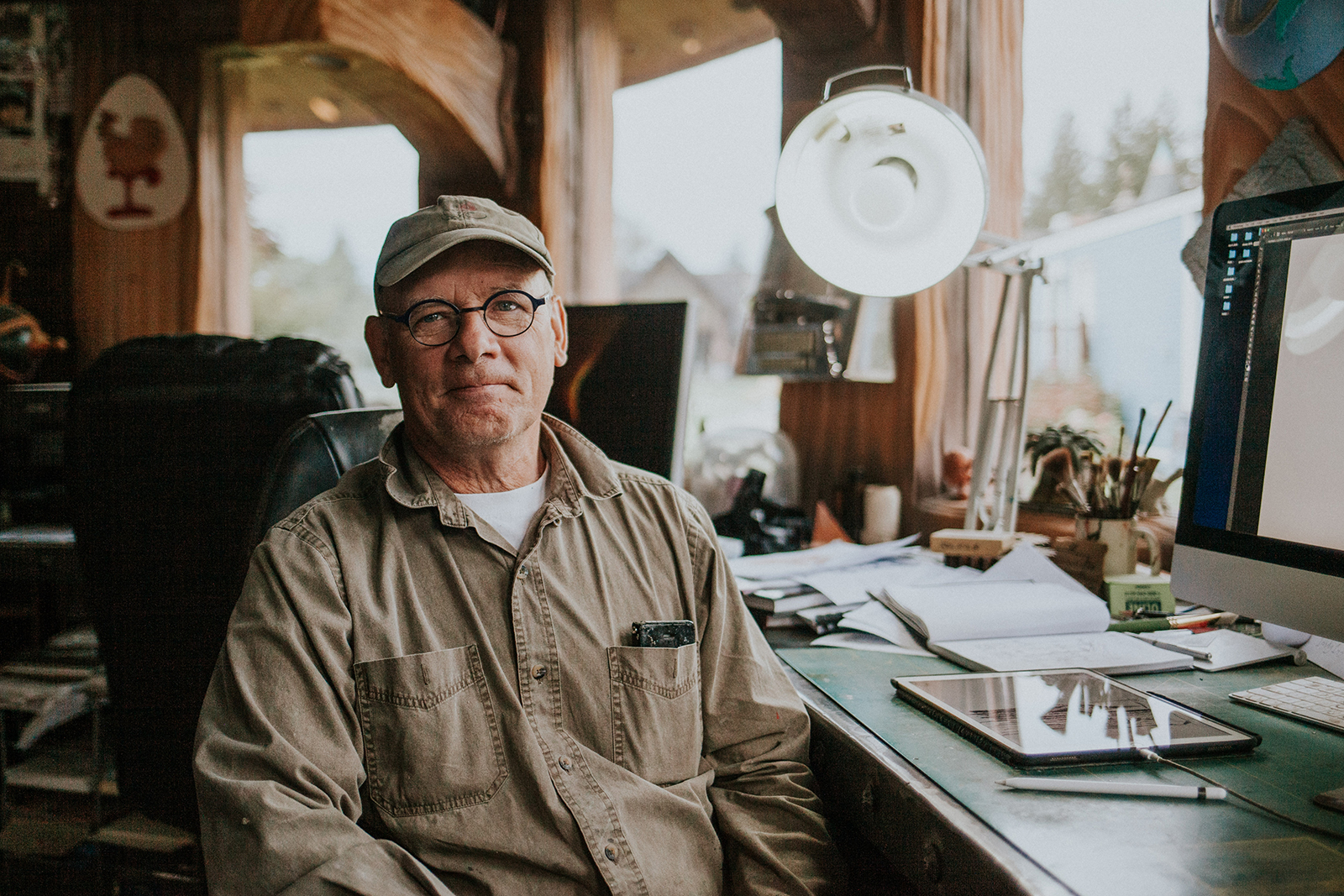 Now, let’s start with Dan’s story. He’s been an artist his whole life. Growing up, Dan was a fine artist and became a well-known for his pen and ink artworks. Later, he travelled all over North America painting historical murals.

When he turned 21, Dan visited Disneyland with his wife, Janis. Disneyland quite literally changed the course of his life. He knew he wanted to create these kinds of fanciful projects. But first he had to learn the skills, acquire the necessary tools, and grow the business that has become the Imagination Corporation.

It took about 15 years for his work to fully morph from fine art into the creative business that it is today – all of which was done with Dan’s passion for storytelling (but more on that later). 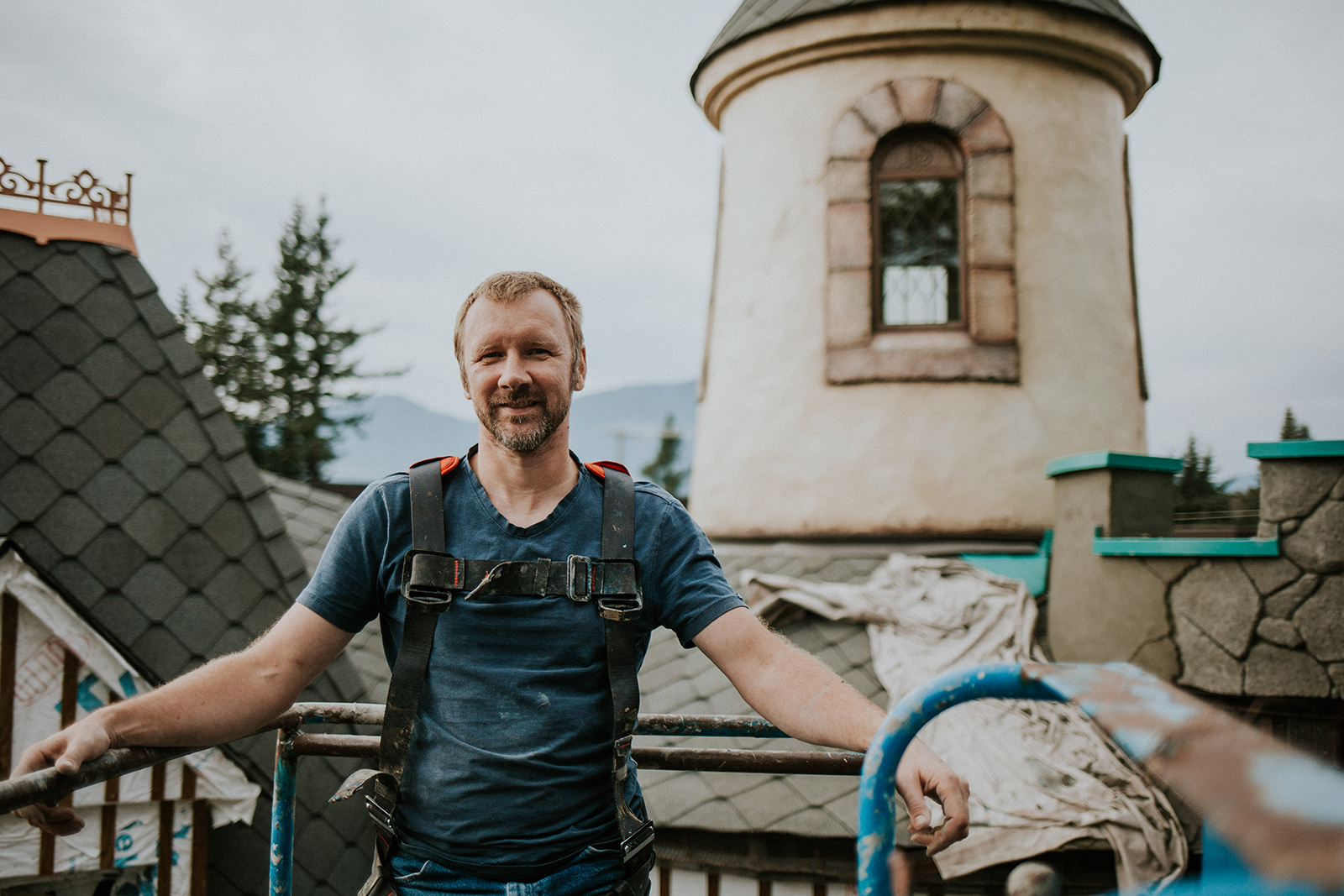 Peter followed in his dad’s footsteps and as a child, travelled around with Dan, his mom Janis, and sister Becke painting murals. Both Peter and his father had big smiles telling us about this time in their lives.

As the Imagination Corporation grew, Peter stepped in and assisted Dan with large scale projects. One that they highlighted in particular was West Edmonton Mall’s Galaxyland remodel. At one point, they had a 21-person crew working tirelessly on this massive project, as well as other projects (in other cities). When this rush of projects was completed, both Dan and Peter agreed that they wanted to do things a little differently, and purposefully downsized their company so they could focus on quality rather than quantity.

After the West Edmonton Mall project, Dan, Peter, and their families moved to the Valley. When they landed in Yarrow, they went to work on building a family home as well as a workshop so they could tackle projects there, rather than travelling to worksites and being away from home for long periods of time.

HOW DO THEY CHOOSE THEIR PROJECTS? 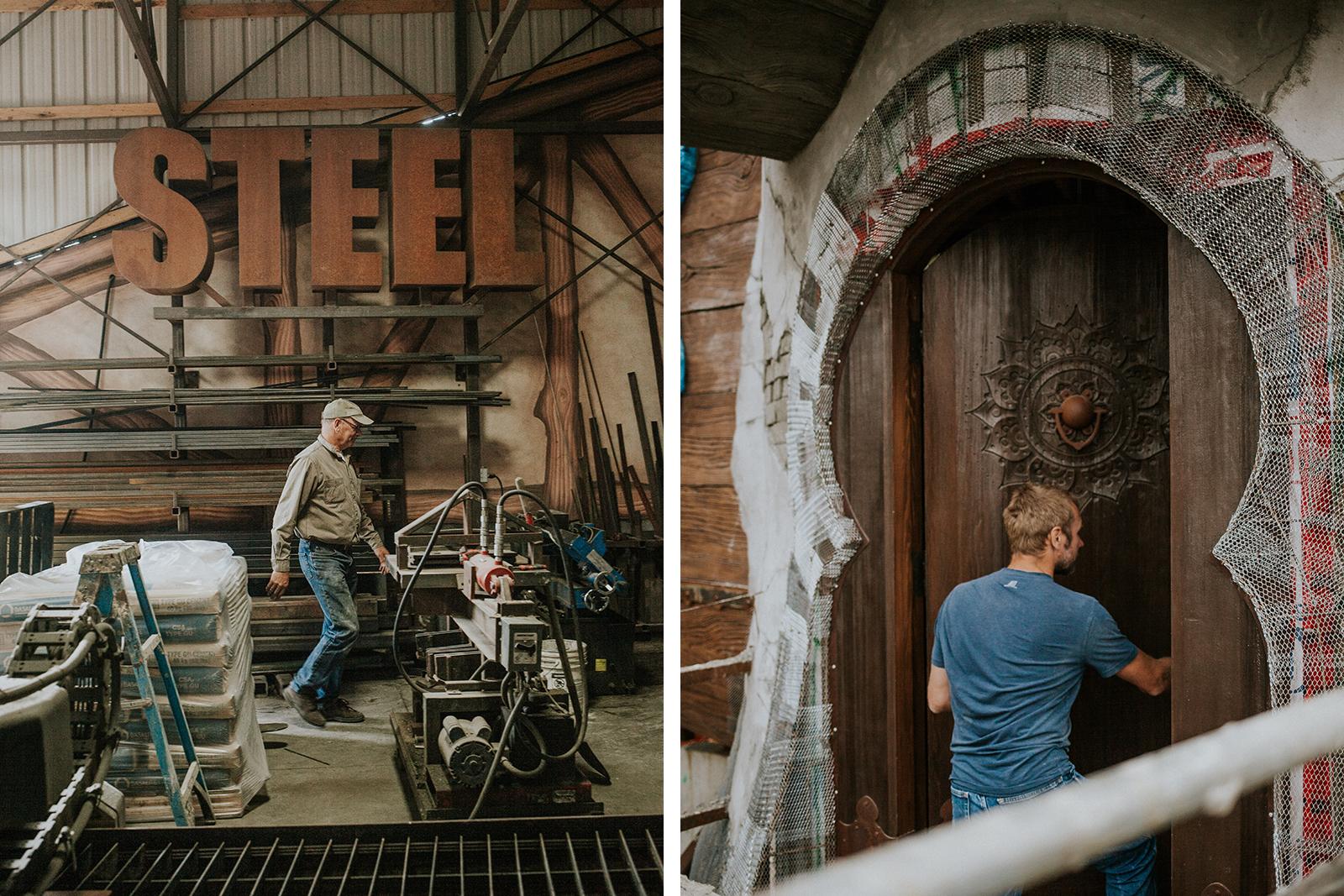 Once completing their home and the workshop, Dan and Peter’s approach to taking on projects changed. They learned through the West Edmonton Mall contract that they must be passionate about each project while preserving their time with family.  So, they developed a 5-question roadblock that every job must make it through. They told us they turn down far more jobs than they accept, these days. Want to know their secret questions? We’ll tell you (and you can even use them for your own work!).  1. Will this job be fun? 2. Will this job move us toward our long term goals? 3. Will this job’s deadline allow us time for our family life?   4. Will this customer trust us?  5. Is the budget sufficient for us to do the project right?   If they can get 5 “yes” answers, then they’ll take the job. If not, they’ll say no. 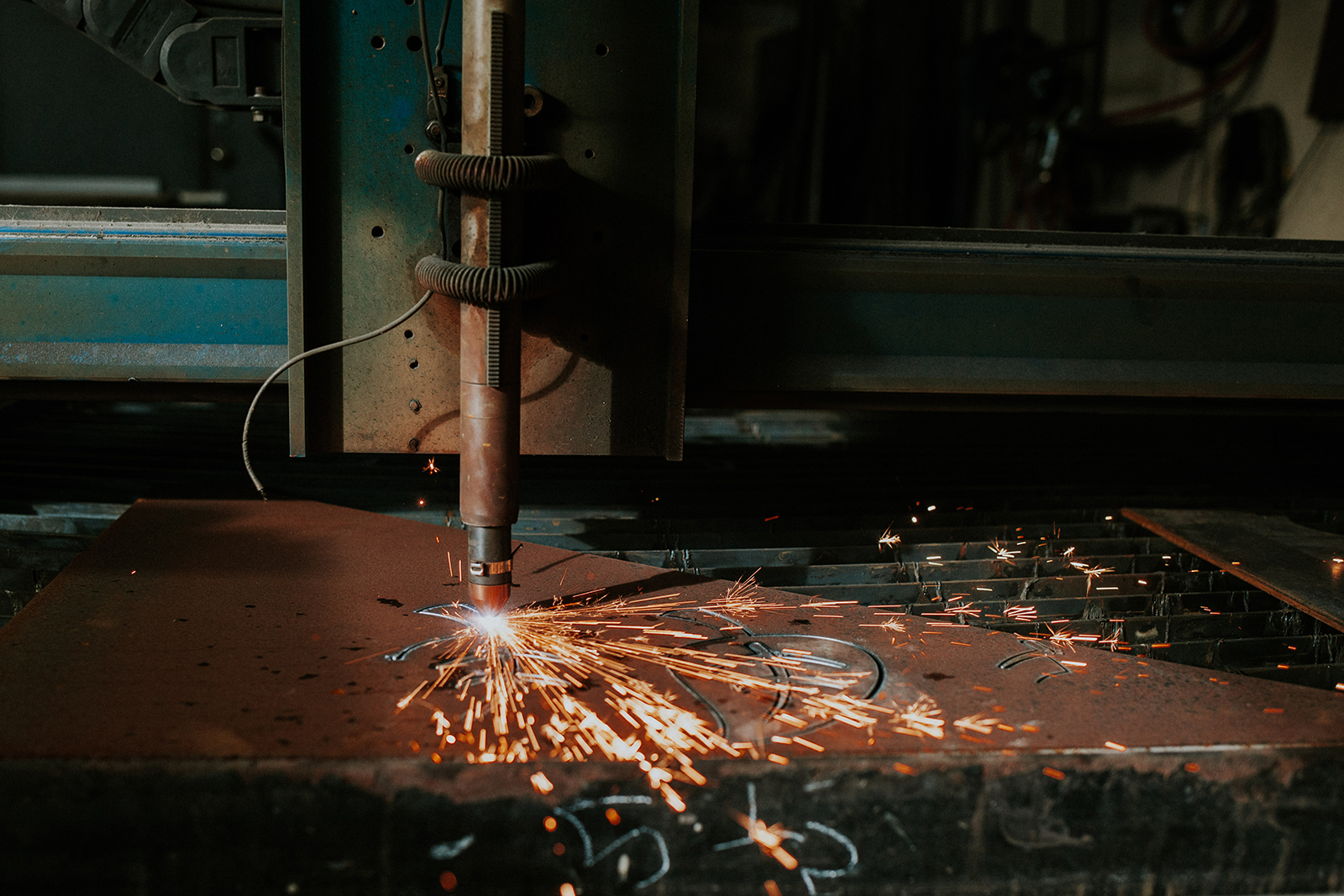 You might be wondering which project was the first one to make it through the 5 questions. Well, it was our very own local amusement park: Giggle Ridge.   Giggle Ridge is one of those places that transports you into another dimension – every detail is so carefully thought out and planned. When Dan toured the site before it was built, he could see the whole park in his mind’s eye every step of the way. Now, when we walk through the park, the same story he dreamed up so long ago comes alive right in front of our eyes. 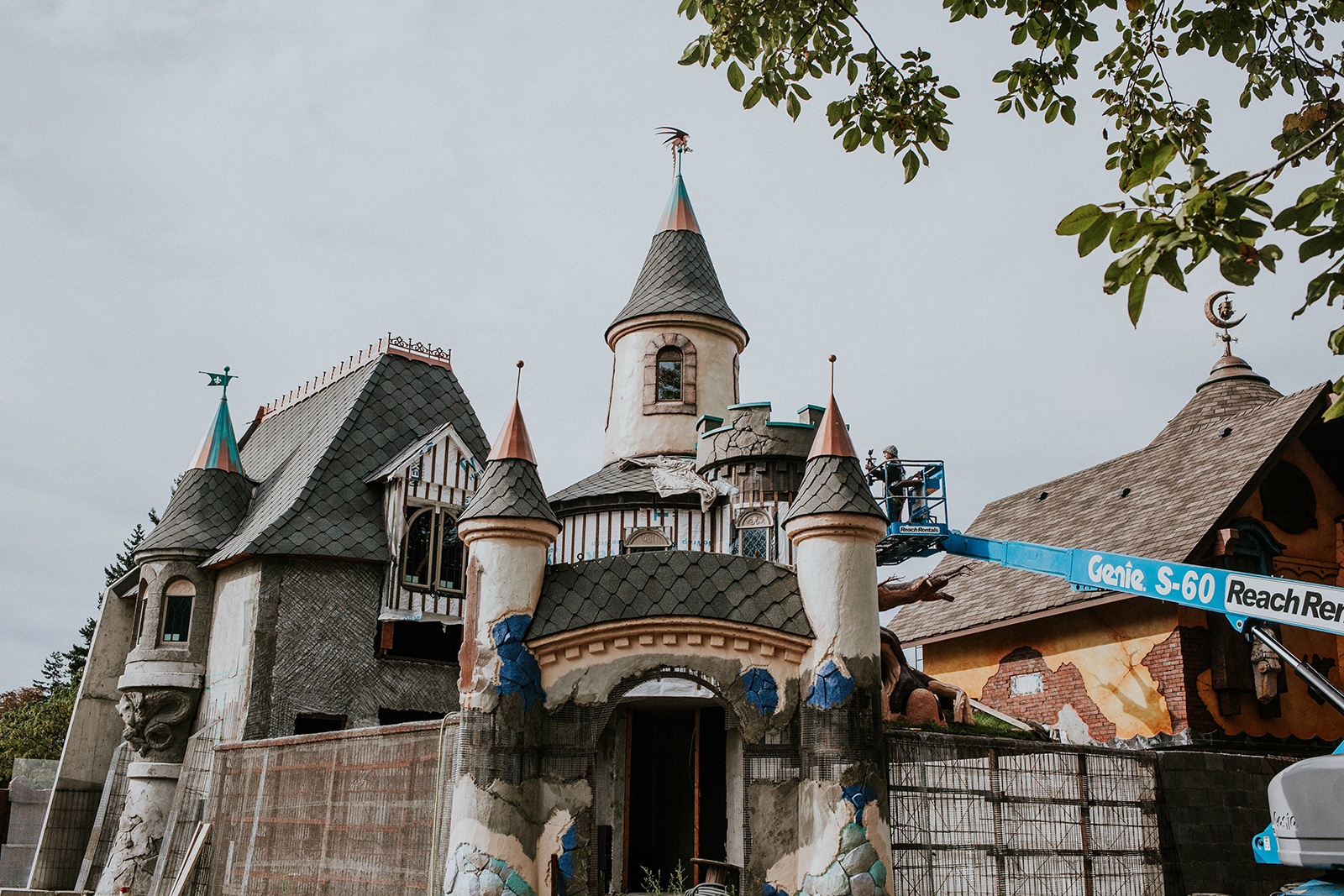 Okay, so you might be wondering how we went from the Imagination Corporation to now introducing a hotel into this story? We were amazed by this plot twist too! As Dan and Peter walked us through the half-built storytelling space, we could hardly keep our jaws off the floor.

The Hazelnut Inn came as an idea after Peter and his wife got married. They honeymooned in a castle (no biggie), came back home, and said to Dan, “We have to do that, but in Chilliwack!” And, as these Makers of Imagination do, they began sketching their ideas and plotting a story right away.

The Hazelnut Inn is going to be – dare we say – a world-renowned attraction. It’s true! We haven’t seen anything quite like it anywhere. It’ll be a 3-suite hotel, and each suite will be complete with a garden terrace, private indoor soaker tub, and rooms that feel straight out of a fairytale.

As we walked through the under-construction suites, we saw a tall ship bedroom, twirling staircases, domed ceilings, and mermaid figureheads coming out of a wall… those are just a few of the hundreds of details they are putting into these spaces.

Dan and Peter said that before they start any project, they sit down together and come up with a storyline, and then draw their plans from there. Cool right? So, just like the rest of their projects, each of the Hazelnut Inn’s suites will have unique, individual stories to tell. You can read all about the suite’s stories on the Hazelnut Inn’s website. 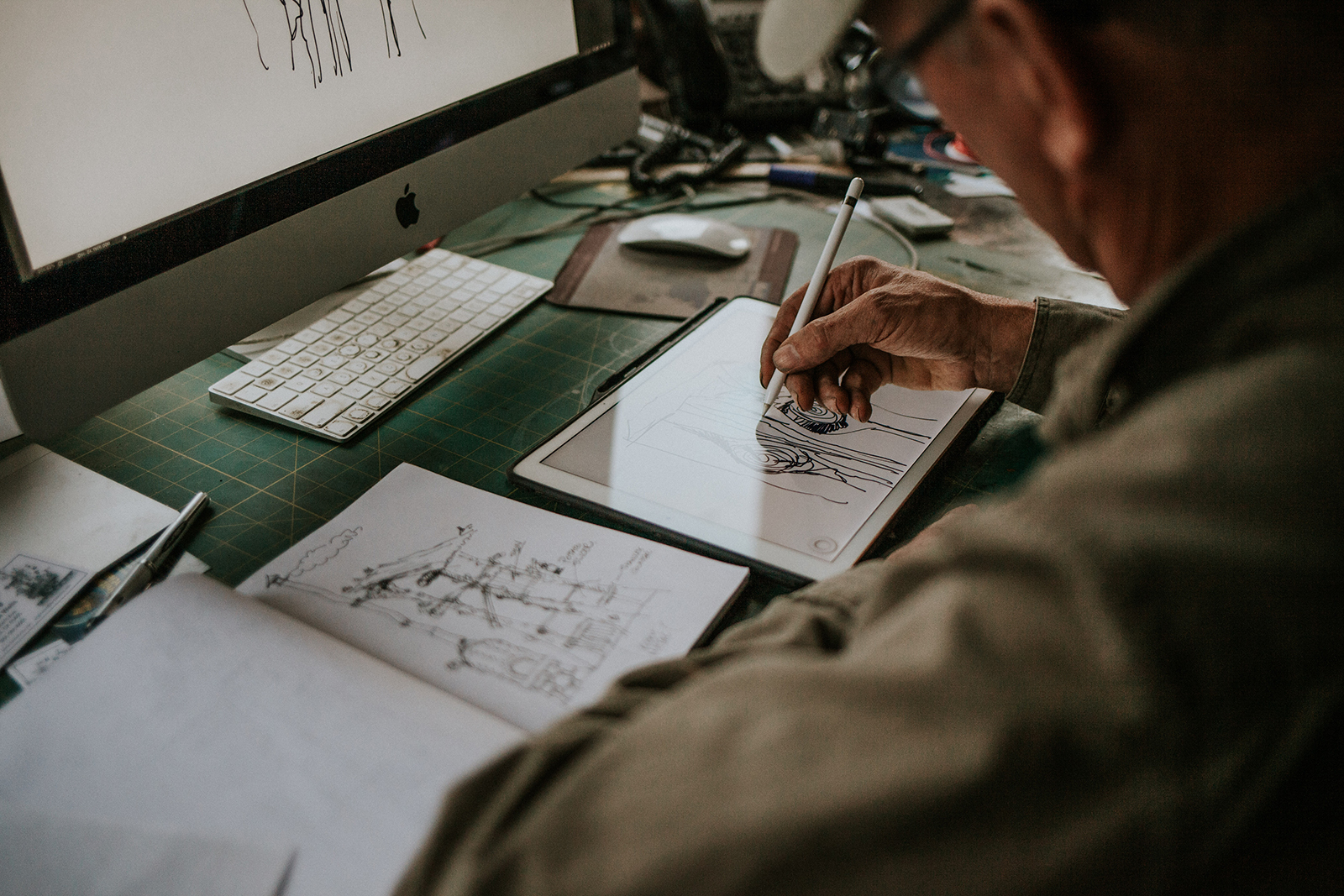 Now, we’ve talked a lot about Dan and Peter, but we do need to give a special shoutout to their family members who are just as much involved in the Imagination Corporation and the Hazelnut Inn.

Janis (Dan’s wife) keeps everyone in line (a tough job). She does the bookkeeping and is the gut check person anytime someone has a wild idea (Janis has an innate skill of helping everyone refine crazy ideas into brilliant ones).

Hailey (Peter’s wife) started out as an employee of the Imagination Corporation and now she helps run the business. She stole Peter’s heart, and they are now married and have two beautiful kiddos (Henry and Juniper).

Becke (Dan and Janis’ daughter) runs the paint crew and is a master at it! Becke’s teenager, Phoebe is also a talented artist – it seems to run in the family!

Grant (Becke’s husband) divides his time between the putting out fires in the office and slinging concrete in the workshop.

Matt, who isn’t a family member (but might as well be!) has spent 7 years with Dan and Peter – welding, wiring and concrete sculpting – he does it all!

Whew! That’s a whole lot of talented Yarrow people, if you ask us.

WHAT’S NEXT FOR THE IMAGINATION CORPORATION AND THE HAZELNUT INN?

There are always fun things ahead for the team behind the Imagination Corporation and the Hazelnut Inn. Their biggest goal with every new project? Raising the bar from the last one! They hope to continue doing one of a kind, top of the line work. In between client jobs, they plan to finish the Hazelnut Inn and open their doors sometime in the next few years. They also hope to continue offering creative workshops (people fly in from all parts of the world to attend!) to teach individuals the skills they need to become, well, Makers like them. 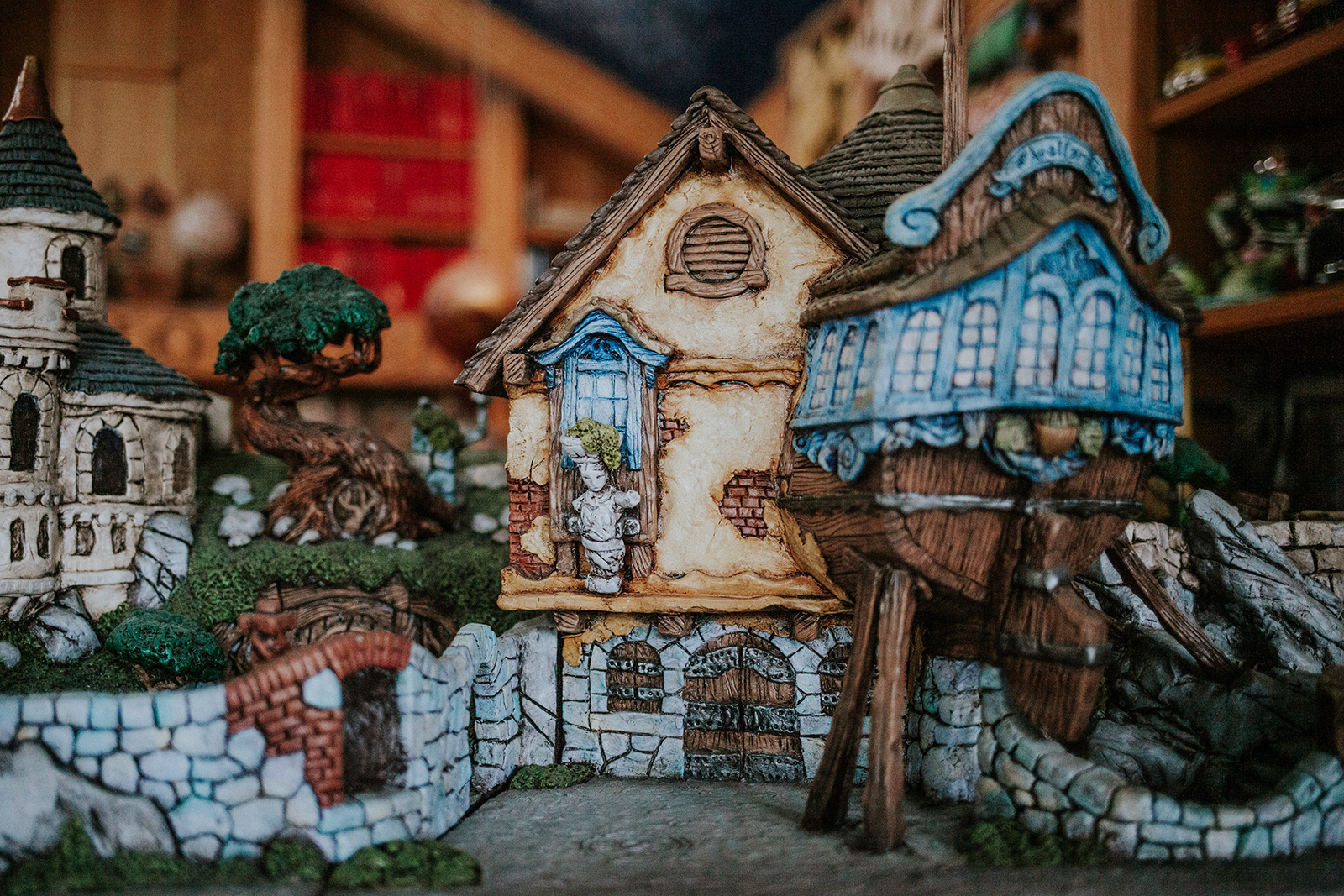 Be sure to take a day trip out to Yarrow, park your car and walk by the outside of the Imagination Corporation property. You’ll be able to peek through their fence and see what’s in store for the Hazelnut Inn. If you see Dan, Peter or any team member – give them a holler and tell them we sent you!

Oh, and keep an eye out for when the Hazelnut Inn opens to plan your stay in this one-of-a-kind hotel!

And of course, be sure to follow along with them online via Imagination Corporation and the Hazelnut Inn!