The other day I had the privilege to hike the amazing Mt. Slesse Memorial Trail with a handful of people to assess some of the work that needs to be done to make it one of Chilliwack’s flagship trails. For many Chilliwack residents the peak of Mt. Slesse is a prominent and well know feature dominating the skyline as we gaze up the Chilliwack River Valley. However many people do not realize the history and intrigue that is associated with the mountain and all of the features that make it truly a world-renowned gem.

Throughout history the “Fang”, as it was known by many local first nations people, was a sacred place, however it received its modern acclaim beginning on December 9, 1956. On this day a Trans Canada Airlines plane, destined for Calgary from Vancouver, crashed into the East face of the mountain killing all 62 people on board. At the time this was the worst airline crash in Canadian history, and adding to the profile, there were 5 CFL football players on board who were heading back East after an All-Star game. Needless to say this event rocked the nation.

The actual crash site was not discovered until May of the following year by a group of mountaineers and immediately a recovery effort was undertaken by the mountaineering community to bring home the bodies of those who had perished. This event marked the genesis moment for what is now Chilliwack Search and Rescue, the second busiest SAR team in the country, since nothing like this had existed before. The recovery effort proved to be futile, as the crash was too high on the mountain’s sheer rock face, so instead the federal government designated 582 hectares on the East face of the mountain a protected memorial site. 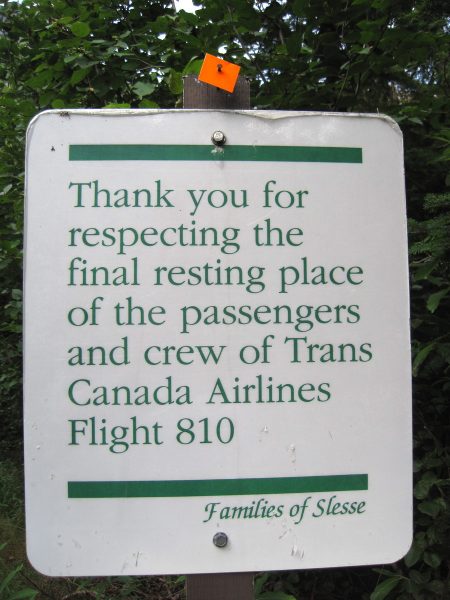 Mt. Slesse is also home to a rock climbing route that was first climbed on the East face in August of 1963 by one of the most prominent rock climbers in world history, Fred Becky. The North East Buttress of Slesse is still heralded as one of Fred greatest first ascents, even with his undisputed title as being the all-time world-record holder for the number of first ascents credited to one man. This route is now listed in an authoritative guidebook named “50 Classic Climbs of North America”, sharing pages with climbs such as Mt. McKinley, Mount Waddington, Mt. Rainer, Grand Teton, as well as El Capitan and Half dome in Yosemite.  As this list attests, Slesse is quite the piece of granite and we get to call it our own as it is situated a mere 28 km from downtown Chilliwack!

Now the work is beginning to rebuild sections of the trail that access this incredible piece of backcountry as an initiate partnering between many organizers including the Chilliwack Outdoors Club and the Chilliwack Forest District. The parking area will see an overhaul with new signage describing the trail, as well as a new bridge spanning Nesakwatch Creek, currently the largest obstacle on the trail. The work will be taking place early this summer with some of the larger infrastructure improvements continuing next year as well. So if you haven’t experienced this trail already I encourage you to get out there and drink in some of Chilliwack’s amazing views and incredible history.

“The proper function of a man is to live, not to exist. I shall not waste my days In trying to prolong them. I shall use my time. – Jack London

– Sam Waddington – Owner of Mt. Waddington’s Outdoors: Equipping you for Rock, Water, Snow, Sand, Wind and anything else the Outdoors can throw at you!

Volunteer Opportunities in Chilliwack, BC

Read More
Comments Off on Volunteer Opportunities in Chilliwack, BC

Do Your Part – Protecting This Gift

Read More
Comments Off on Do Your Part – Protecting This Gift

7 Must-Try Summer Cocktails in Chilliwack, BC

Read More
Comments Off on 7 Must-Try Summer Cocktails in Chilliwack, BC